Chuchai presenting a korat kitten to

Chuchai used to host two thai cats shows per year which are sponsored through his Korat Conservation Club, one during the Phimai Festival in November and the other during the victory celebration for Thao Suranari at the end of March.

The Phimai thai cat show first started in 1995 and is the only remaining cat show in Thailand where the Queen’s cup is awarded.

The victory celebration for Thao Suranari traces back to 1826, to a lady who at the time was called Mo. Mo was the wife of deputy governor of Korat in 1826 when the King of Laos invaded the Korat capital while the governor was away. She was taken prisoner along with all the men. The Laos army released all the women and told them to cook food for them. Mo asked the Laos army for knives for cutting the meat and vegetables, which she then gave to all the imprisoned men. They were able to escape surprise the laos army and resulted in their retreat from Korat. The third king of Thailand, Rama III learned of the attack and sent troops after the laos army, eventually destroying the capital of Laos. Rama III awarded Mo with a new title, Thao Suranari or brave lady. The show is held at the Korat Provincial Livestock office where Chuchai’s longtime friend and Korat Judge Manodt Wongwaew works. The governor of Korat attends this show each year to show appreciation for the Korat cat as a symbol of Phimai. Photos from the show in 2014 can be viewed Here.

Chuchai uses the Tamra Maew as a standard, and his goal is to breed cats for conservation as described in these ancient poems. Chuchai believes the ‘perfect’ Korat should have hair texture the same as doklao with lots of silver tipping. For male Korats he believes they should have a long, sturdy tail with a muscular body. He describes the paws as having an egg shape, whereas females should have a long slender tail with a toned body. Despite popular belief that Korats should have a heart shape head, the Tamra Maew does not  mention a heart shape and Chuchai does not focus on breeding korats with a heart shape head. Instead Chuchai focuses on coat texture, silver tipping, tail length and personality.

In his second generation of korats, a local had found a very handsome male from Baan Nuan Mhan, a nearby village. This was the first cat that Chuchai brought to a show in Pattaya, taking back 1st place. Chuchai named the cat Jao Uan, translating to a cute word for ‘little fat boy’. Jao Uan was his first male cat which consistently produced Korat kittens without any white spotting. Jao Uan however did not have yellow/green eyes, but instead more of a orange/copper color. Chuchai was well aware of the Tamra Maew and knew that Korats should have greener eyes.

At this time foreigners had gotten word that Chuchai was breeding korats and they began to visit his cattery. They were interested in purchasing Korats from Chuchai, but they wanted confirmation that his kittens would develop green eyes, as this was already part of the standard abroad. Chuchai was not comfortable selling cats to foreigners at this time as he knew he had not achieved the greener eye color that the Tamra Maew described and foreigners were interested in. 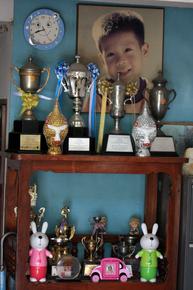 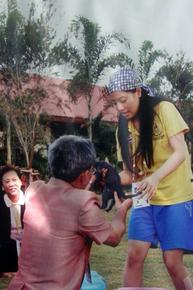 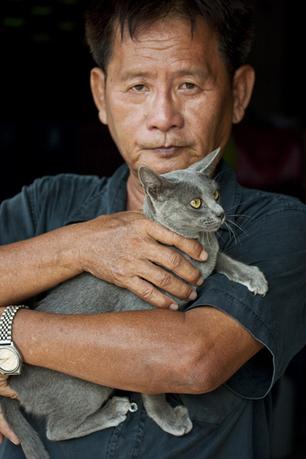 Chuchai was born in 1952 and grew up in Phimai, a small city in Korat province. Despite its small size, Phimai is centered around one of the most famous Khmer empire temples in Thailand, dating back to the 11th Century. During Chuchai’s childhood he remembers many Korats living within the temple and as pets in the surrounding homes. They were not ‘perfect’ Korats, often with white feet or large white lockets, but there was an abundance of grey colored cats. For the most part these cats went unnoticed and were largely unappreciated.

In 1964 restoration work began on Prasat Phimai temple as a joint Thai-French project which spanned five years. The restoration project was managed by M. Bernard Phillip Groslier, the same director of the restoration work done at Angkor Wat. At this time Chuchai was 14 years old and remembers stories of the French restoration workers commenting on how beautiful these cats were, and they were surprised that the locals did not appreciate these cats.

In 1993 Chuchai, with his childhood memories and stories from the French workers decided to start breeding korats, to give them the appreciation he felt they deserved. Chuchai’s close friend Khun Prawit Srishophon who was the governor of Phimai at the time decided they wanted the Korat Cat to become a heritage symbol for Phimai and together they started to look for korats suitable for a breeding program.

When Chuchai first started looking he found it very difficult to find Korats without white feet, or large white patches on the chest or belly. He asked friends and local farmers to search the temple and streets for Korat cats, and he paid them for every cat they could find that he thought would be suitable for breeding. Chuchai started with roughly 10 korats, all of which had some degree of white spotting but with nice long tails. With his foundation cats he started the Association for Korat Cat conservation in 1997 with Khun Prawit.