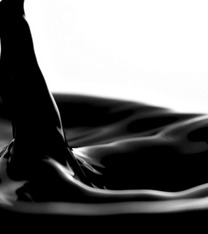 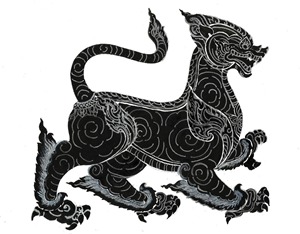 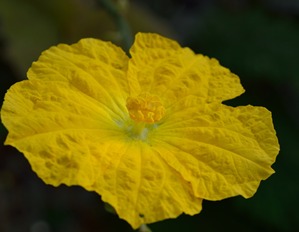 The Tamra Maew  compares the color of hair to a black onyx gemstone, a rich black color with a glossy finish. In some manuscripts a description for the Ninlarat appears, in addition to Konja, as a separate Poem. Ninlarat, translating to "Onyx - Jewel / Gemstone)" is said to have black eyes, teeth, claws and tongue. A cat with a black tongue seems unlikely, and today the names Konja and Ninlarat are used interchangeably. It is important to note the Konja is both described, and depicted to have a white stripe from under the chin, down the chest, belly and ending at the start of the tail. Today this stripe is often forgotten, or ignored and a solid black cat is called Konja. Other manuscripts compare the color to black ink, also a glossy rich black color. The eye color is described as the color of a blooming Angled Gourd Flower or in Thai language Dok Baup (ดอกบวบ), an intense yellow / gold color. The Konja is said to walk with a beautiful and elegant stride, compared with the Singha - a mythological lion in thai folklore. Anyone owning, feeding, or raising this cat is believed to have success in various aspects of life depending on the manuscript, ranging from health to achieving high rank. Translations by TIMBA. 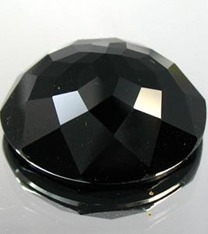 In Thailand, the solid black cat is known as a Konja, or in some instances a Ninlarat. These black cats have the characteristic oriental physique and often have gold eyes. They have an unusually black coat that is such a saturated color it shines. When you see a Konja for the first time, one immediately thinks of a panther! Black as night with eyes that almost glow in the dark.
While the Konja is described in the Tamra Maew  (Cat Poems), only Kamnan Preecha continues to breed and preserve this color of cat in Thailand to show visitors for educational purposes. This is because the Konja is encountered in nearly every temple, it is not a rare color.