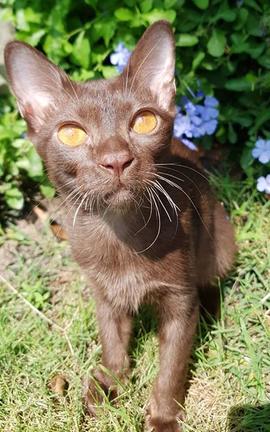 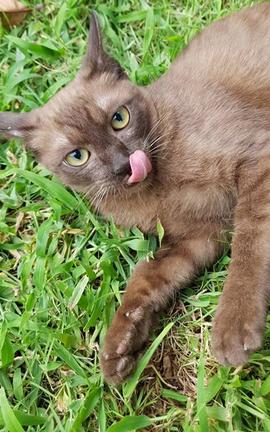 In all the older Tamra Maew  manuscripts the name Thong Daeng  appears, or "Copper". The name Suphalak  also appears within the Tamra Maew  poem in reference to the cats characteristics as being magnificent. One poem makes reference to the rarity of this cat, in comparison to gold. The coat color is said to be a solid color of thong daeng. While the translation to English is not completely clear, there is mention of 'ripe copper', perhaps better referred to as heated copper which takes on more of a red cast. In other manuscripts the hair color is simply described as solid red. The eye color is compared to thuptim , translating to Pomegranate, or Ruby. A cat with ruby red eyes seems unlikely, however the skin of pomegranates in Thailand have yellow-gold color, offering an alternative interpretation more accurate to the color observed in suphalak seen today. The eyes are also said sparkle and shine, like shining rays. Translations by TIMBA. 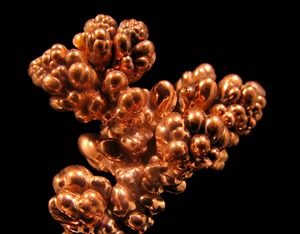 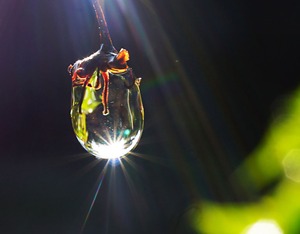 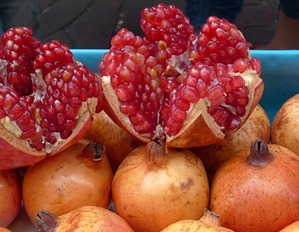 Breeders in Thailand interested in preservation of the these ancient cats often consult the Tamra Maew  (Cat Poems) written in the samut Thai  (Thai Book) manuscripts. The poems provide a loose description of the appearance and characteristics. A more detailed description of the thai cat poems can be found on the History page.
Poems for the Suphalak use descriptive terms such as "color of copper glinting", "claws and fur an unmixed red" and "color of red light all over" (translations by Martin Clutterbuck).
In agreement with these poetic descriptions, the Siam Cat Club used the following standard for judging Suphalak in cat shows held in Thailand.
"Body Color: Brown tinged with red or a rust color, as tamarind seeds, or light brown. Color is consistent over the whole body, including legs, ears, face and tail."
So why has there been so much confusion over what a Suphalak should look like? The answer is simple, in recent history only one thai breeder has had a solid brown cat, a male named Samsen owned by Kamnan Preecha. Reproducing this color has been his goal for the last decade, but with limited knowledge of recessive genes it has proved difficult to eliminate the burmese gene (cb), while isolating the brown (b) gene. This cat is now retired from breeding, but can still be visited at The Thai Cat Center proudly presented as a Suphalak.
In 2013 a solid brown male cat named Ayothaya was rescued from a temple in Bangkok. With the discovery of the genes responsible for brown color and the burmese pattern it is now possible to understand the genetics responsible for the Suphalak. As suspected, the Suphalak is a solid brown cat, or sometimes referred to as a chocolate self. Ayothaya, has tested as CC bb DD, this is identical to the genetic makeup of the Havana Brown, or a chocolate oriental (irrespective of type). For a more comprehensive explanation of color genetics visit the Genetics page.
Ayothaya is now being incorporated into Suphalak breeding programs at The Thai Cat Center, and The Maew Thai Cattery where he currently lives. With the help of these Thai breeders and further genetic testing we hope over the next few years to create several different breeding lines, successfully resurrecting a very special color nearly lost in Thailand. Foundation cats for this program in the future include Konja, Thai Burmese, Chocolate Point Wichienmaat and Lilac color. For more information and updates on the Suphalak breeding program please visit the Suphalak Breeding Program page.
The Suphalak is the most rare of the Maew Boran colors.  The hallmark of this color is a rich brown coat, just as dark on its body as on its paws, nose, and tail. This cat is as brown as the Konja is black and Korat is grey. In the thai sun, the coat develops an almost red cast, though in less severe light, the coat remains a more solid brown. The Suphalak could be considered the natural breed equivalent of the Havana Brown.