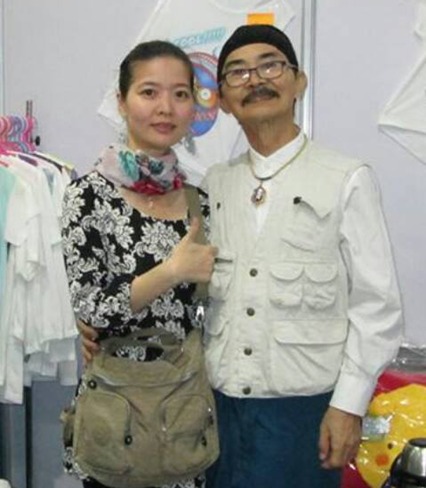 Nestled in the heart of downtown Bangkok, Khun Preecha Vadhana (nickname Dtu), his wife, and his daughter Khun Kingkarn Vadhana, have been breeding the ancient Thai cats for the last three years. Pictured to the right are Dtu and his daughter Kingkarn.

While Dtu grew up in Bangkok, he was born in Trat province where his family owns a rubber and coconut tree plantation on Mai Si Island. His dream was to study abroad in Japan, but when his parents passed away, he ended up staying in Trat and managing the family business.

Eventually he made his way back to Bangkok where he became a purchaser for a famous Japanese restaurant, where he has worked for the last 30 years.

Now retired, Dtu bought his first female Wichianmaat (Siamese) cat from a reputable Thai breeder, Aree Ubumrung, who he named Ubumrung in respect to the breeder. Fascinated by the unique points of the Wichianmaat and the extraordinary personality he wanted more, and to share these cats with other people.

Dtu mated her with a male from Kamnan Preecha in Ampawa. Dtu was captivated by the mating and birthing process and it was at this point he decided to become a breeder. He obtained 3 cats from Khun Suphat, a Thai Wichianmaat breeder.

With very few Wichianmaat breeders, Dtu started visiting temples around Thailand rescuing Wichianmaat cats and implementing them into his breeding program.In 2012 he received an award from Bang Rak district in Bangkok for the preservation of the Wichianmaat as an important heritage cat to Thailand. The popularity of the Wichianmaat in Bangkok quickly grew with multiple TV stations and shows interviewing him, some of which can be watched in the links below.

Committed to preserving and promoting the Wichienmaat, a good friend of his, Ajarn Putinakorn at Sarapat Thonburi School and students constructed, and still manage his website which can be found below. In the last year Dtu has expanded his preservation efforts to include the Korat, Khao manee, and the Suphalak.  If you are in Bangkok, Dtu and his family warmly welcome you to visit their home, cattery and beautiful cats.