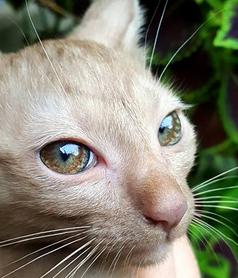 Currently only cats that are B_ D_ have been observed and confirmed for cmcm, cbcm and cscm and it is unknown what any of these cats will look like in blue, chocolate or the lilac varieties. It is also unknown how the new mutation interacts with the red/orange gene O. There are several breeders in Thailand and in the US currently working on a better understanding of the different interactions between the different alleles. The table below indicates our current understanding and notation for describing the different combinations of alleles. The observed color for Wila KrungSri (cbcm BB DD) in most known examples is very similar to a sepia Burmese (cbcb BB DD), however there are some notable differences in some cats. These cats have more of a uniform brown color over their entire body, indicating they may be less sensitive to temperature as compared to a cbcb cat. The eye color can range from a yellow (as expected) to more of a blue/aqua color. While some cats may be indistinguishable from sepia burmese, there are Wila KrungThep with a more uniform brown color and blue eyes which makes for an unusual and striking look not observed in any other breed of cat. The observed color for Wila KrungSiam (cscm BB DD) is indistinguishable from a seal point Wichienmaat (cscs BB DD) based on the known examples within Thailand. These examples suggest that cs is dominant to cm but this is still under current investigation. 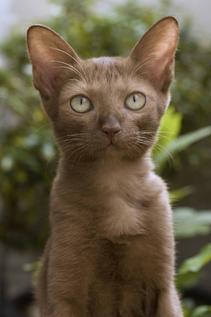 The new mutation is located on the tyrosinase gene, the same gene that the siamese (cs) and burmese (cb) mutations are located on. The tentative naming for this new mutation is (cm) where the m stands for Mai Thong. Alternatively, the former name Mocha has been suggested by breeders in the US, however breeders and the general population in Thailand prefer a thai name for this new discovery. Therefore Wila KrungThep and Si Mai Thong has been chosen as the breed name and color, respectively.
Cats that have one allele for cb and one for cm are called Wila KrungSri. Wila = Cat and KrungSri = Ayuthaya (former capital of Thailand). More information about Wila KrungSri can be found on the Wila KrungSri page. Cats that have one allele for cs and one for cm are called Wila KrungSiam. Wila = Cat and KrungSiam = Siam (former name of Thailand). 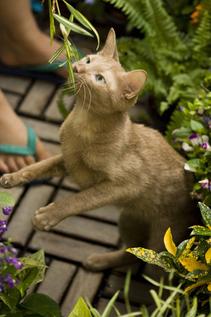 Mai Thong was the first cat found in Thailand in 2014 which displayed the unusual coat color. Mai Thong's DNA was tested at veterinary genetics laboratory (VGL) which indicated she should be a black cat (CC BB DD), which clearly she is not. At this time no other cats of this color were known and it was not until several years later more cats were discovered in thailand which are now actively being used in a breeding program to better understand the nature and interaction of the new mutation.
In keeping with Thai traditions for the naming of other colors, such as Si Sawat (Korat - Color of Sawat Seed) and Si Thong Daeng (Suphalak - Color of Copper), the name Si Mai Thong translating to "color of golden silk" has been chosen to describe the color, analogous to Seal and Sable used for Siamese and Burmese respectively. Photos of Mai Thong are below.
Wila KrungSri 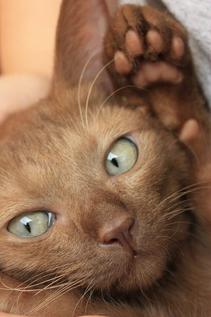 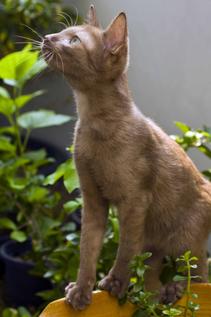 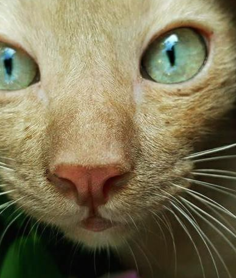 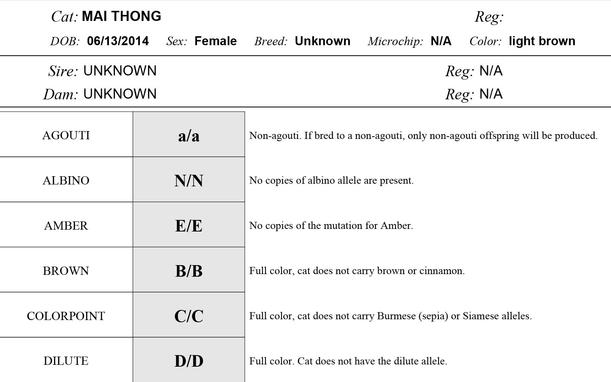 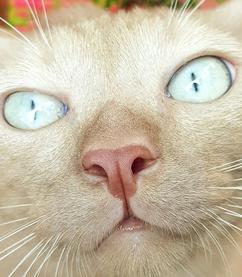 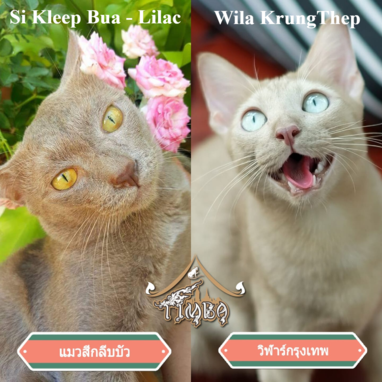 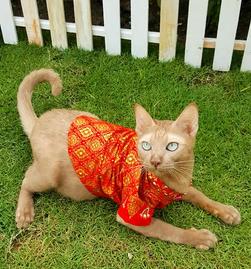 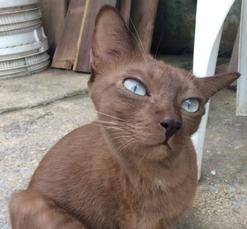 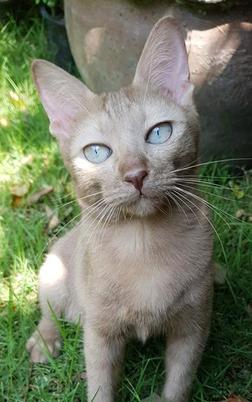 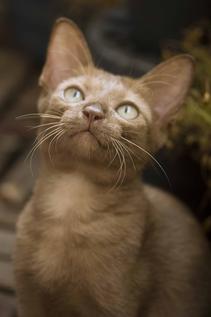 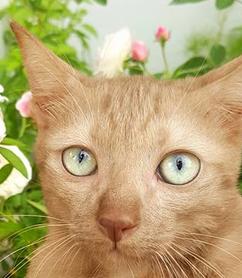 There is no poem in the Tamra Maew that describes this unique color of cat. With the number of unrelated cats discovered within Thailand in the last several years it is likely this mutation has existed for hundreds, if not thousands of years but has gone unnoticed or under appreciated until recently. 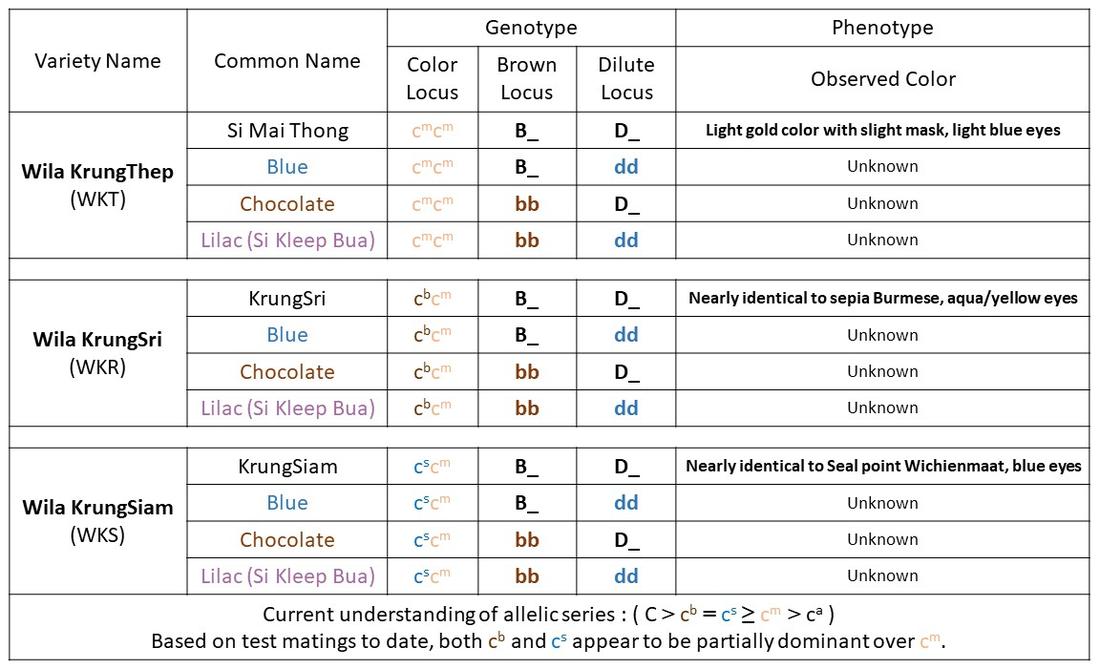 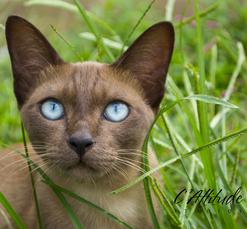 Wila KrungThep is a new mutation (2014) discovered in the native cat population in Thailand but not until more recently has an effort been taken to better understand the nature of the mutation.
Wila translates to Cat, and KrungThep translates to Bangkok, therefore can also be referred to as the Bangkok Cat. The naming concept involves the use of Wila, which comes from an older version of thai language (as opposed to Maew = Cat which comes from modern thai language) and KrungThep or Bangkok, the capital of Thailand where the first cat with the mutation was found. It is the combination of what is most likely a very old mutation, yet only recently discovered in modern Bangkok.
The first cat identified in Thailand was named Mai Thong, or 'golden silk' because of her unusual light golden looking coat. The color of Wila KrungThep is therefore called Si Mai Thong or 'color of golden silk'. 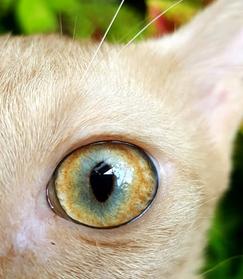